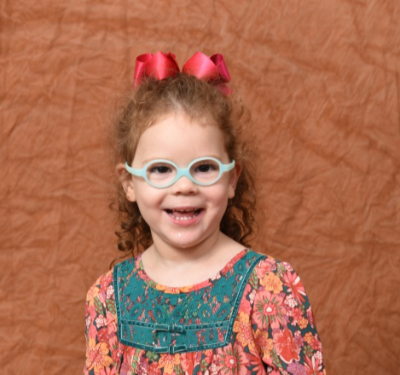 When she first arrived at ACCESS Early Childhood, at almost 2 years of age Eloise wasn't communicating. It didn't take long for her first speech therapist, Kasie Birdwell, to take stock.

"When Eloise first came to ACCESS it took a few weeks of getting to know her before it became apparent to me that her speech wasn't just delayed, but that I was seeing signs of apraxia," she said.

The goal quickly became getting Eloise to learn to communicate. 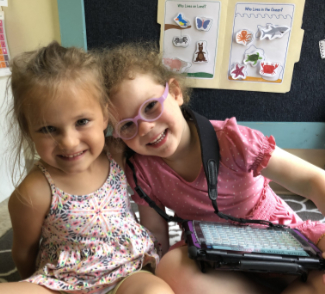 While picture symbols were helpful for Eloise, it wasn't enough.

"She learned that she could ask for what she wanted, but the signs and picture symbols we could give Eloise weren't keeping up with everything she wanted to tell us. There is so much more to communicating than just asking for what you need, and Eloise was ready to tell us more," she said.

So, Birdwell started the process of acquiring a device for her. It arrived just before the end of the summer as Eloise started her second year with Access, at which time she began working with her current speech therapist, Mary Kate.

"Eloise's language and verbal speech have exploded since the introduction of her Accent® 800 and LAMP Words for Life®," she said. "Eloise is an incredibly bright girl with a lot to say. She is able to use LAMP Words for Life to actively participate in classroom discussion and activities; one of her favorite requests is asking for a friend to come to therapy with her. And, Eloise's peers are very interested in her talker and she loves to teach them the motor plan for her new words."

Eloise continues to learn at a rapid rate with her Accent 800 device and LAMP Words for Life.

"Eloise's verbal speech has greatly improved with LAMP – it has given her confidence to try new and harder words," said Mary Kate. "It seems like she is adding new words to her verbal speech repertoire almost every day!"

That Eloise took to her device and LAMP Words for Life so quickly came as a surprise to her family.

"At first we were skeptical about how her Accent device and LAMP Words for Life would help Eloise increase her verbal communication," said her mother. "However, through training classes and more education, we learned the benefits of giving Eloise a new way to communicate besides signs and pictures."

Although Eloise received her device when she turned 3, it didn't take long for her to take to it quickly.

"Within a few months, we saw an improvement in her verbal communication," noted her mom. "In the beginning, she loved to say names of friends and family that were programmed into the device. As time went on, she increased her communication to foods and activities. Now, she is forming sentences with her device." 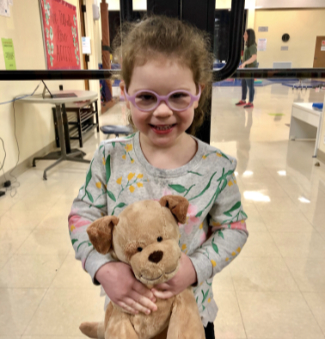 And the learning hasn't stopped. "Her verbal communication has increased alongside her device communication," said her mom. "Eloise's device has helped decrease her frustration with certain day-to-day activities. She can say multiple friends' names, request certain foods, ask for help, and tell us what activity she wants to do. She uses her device at school during circle time; one day, she won the stuffed animal (Biscuit) to hold because she was the best participant in circle time."

Her family couldn't be more thrilled.

"We were surprised with how much her communications skills have increased within 2 years of receiving the device (this August will be 2 years). We are thankful for the technology and therapists who work to give Eloise her voice verbally and through AAC."