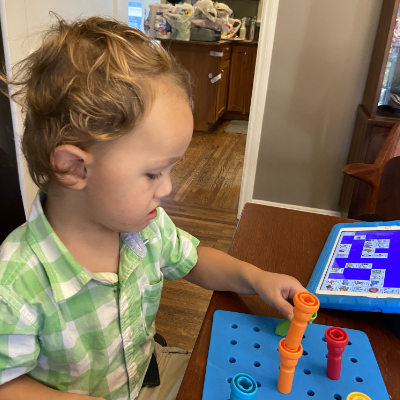 It was when Gus was a 1 year-old that we realized he was behind on several milestones, including speech.

As I had with my other sons, I started signing with him at around 4 months. He had never signed back at this point, but I did think that he understood a few signs.

When he was about 1.5 I tried introducing him to PECS. I could tell that he did understand that the pictures stood for things, but as with signing his motor skills made PECS hard for him and he quickly lost interest.

In February of 2020 our early intervention speech therapist mentioned LAMP Words for Life® to me and said she would bring her device with it at her next visit.

My first thought when I saw it was, "No way." There were so many buttons and they were so small! 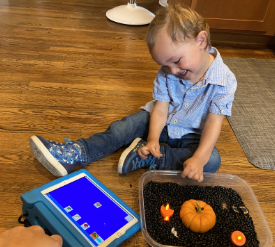 I was an autism specialist and special education teacher before staying home with my kids and had dealt with other AAC devices and programs that were so hard to learn and program. However, I listened to her and then visited a few websites. When I saw that the buttons could be limited and read about the motor planning aspect, I was hooked.

So, in March we bought a new dedicated iPad and the LAMP Words for Life app. At this point, Gus was 23 months old. Since everything was locked down it was just Gus and I and our family learning LAMP Words for Life together until October, when we could finally go to in-person speech. I did attend a virtual training through The Little Lighthouse in April and watched lots of YouTube videos.

At first, I had just a handful of words on one touch including "eat," "drink," "play," and "finished." Within just a few days he was using these words consistently. I slowly added words to one touch as we needed them.

After a few months, I switched to full with Vocab Builder so that just a few words were showing. Gus took to this as well after just a few days! He gets really excited when he sees there is a new word available. He has little jokes, like when he first wakes up from a nap and we ask what he wants he will hit "sleep" over and over and laugh. He knows it's funny to ask for sleep when he just woke up!

One day we were listening to music and a very country song was on. I said, "Gus, do you hear the guitars?" He said" Stop Now" with LAMP Words for Life. Of course I was laughing, and said," Gus, Momma likes this song!" He hit "Bad!" I have never been more excited for one of my kids to criticize my taste in music!

He now can say three words at a time, things like" dad play guitar" and "want ride bike." He uses two words very consistently like "want down" from his chair "drink more" etc.

He has started using it more outside of our home to talk to others, such as his PT and speech therapist. He is so proud when he uses LAMP Words for Life and sees that we understand what he is saying. It has been amazing to watch his progress and to be able to communicate with him.

A few weeks ago his speech therapist had a LAMP Words for Life board poster hung on her wall. When he noticed it he went to it as fast as he could and started hitting the "Eat" button! He was very happy to see the poster, and I'm fairly certain he would eat all day if he could! Just today he used it to tell his PT that he wanted to play and to ride the bike and swing.

I try to incorporate it throughout our day. My four year old is also very proficient on LAMP Words for Life now. He was interested in it from the beginning so we put the app on our other iPad. I think he knows where every word is! I am fairly certain that using LAMP Words for Life also helped teach him to read. He uses the spell feature to type in words and can use word finder. He also likes to make jokes. For some reason he finds it hilarious to push "throat lozenge."

Gus is now 2.5 years old. His most used buttons currently are asking for us to sing his songs like "Row your boat" and "Itsy Bitsy Spider," asking to ride his bike, and to go to the park, and for his dad to play the guitar.

We are very grateful for LAMP Words for Life and the communication it has provided for Gus.