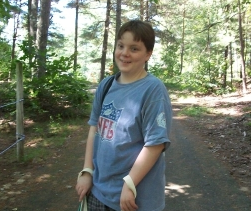 After years of frustration, family members, teachers and classmates are finally getting a glimpse inside the mind of 13-year-old Jim Caster. "He's able to ask for what he wants or what he needs or what he doesn't want," said his speech therapist, Heather Gray. "His personality and sense of humor are starting to come out. You can just see he's so much happier, and you can see who he is as person."

His parents are often surprised by Jim's wry sense of humor and his negotiation skills at snack time. "Jim would ask for six fig cookies. We countered with three, and he countered with four, a dialogue that would not have happened without that support in place," said his father, Steve Caster, of the Vantage Lite device and the Language Acquisition through Motor Planning (or LAMP™) approach.

Jim transitioned to the Vantage Lite communication device — a machine that allows the user to string together words to make phrases and phrases to make sentences — in December 2010. His progress has been encouraging for everyone on his team. "We were doing basic requests when he started, like asking for the things that he really liked, like playing ball or talking about food, like a single word or maybe two words. And now he's using full sentences," said Heather Gray.

His parents have found it much easier to connect with their son. "He never communicated from the back seat of the vehicle until he had his Vantage Lite. It's great; we can hear him from the back. It's so convenient," said mom Kristine Caster.

As a baby, Jim wasn't reaching the milestones set forth by his doctor. He wasn't building with blocks. He would tilt his head to the side when watching TV. At first, the Casters suspected something was wrong with their firstborn's vision. He was ultimately diagnosed with autism around the age of 4 by a pediatric neurologist.

The Casters tried several electronic communication devices and even attended a LAMP workshop a few years ago, but the examples featured younger children and it was difficult to relate to those experiences. “We were avid PECS users and we were determined to have him master the PECS phases before we transferred him on to a device.” They thought it had to be one or the other.

However, once they tried the Vantage Lite, it was the first communication device that worked for him. “In the past, he would just hit one button over and over again for the auditory feedback,” said Gray. Vocabulary on the Vantage Lite can be set up so that two or three buttons are hit before a word is heard. This is to allow quick access to thousands of words but also helped slow Jim down. His hits became more intentional. Steve said once Jim understood what the device could do for him, he excelled. “Having the consistency of where the language is on the Vantage with his great memory has built a strong foundation with his communication.” Gray agrees, "The way the language is set up on the Vantage, it works. With other devices, I don't think we would have seen this success."

Kristine said that specific ongoing training and commitment made all the difference. “We had great supports in place for this transition… Funny thing, I knew my son was ready to be off his book as he preferred his device, and he was clearly showing that at school. One day without telling anyone, I sent him into school with his Vantage and NO PECS BOOK. He did great, but the teachers were like fish out of water.

Gray especially likes the ability to hide some buttons and focus on a smaller group of words before expanding out to add more vocabulary. “Being able to start from a smaller core was also helpful for Jim's team and getting everyone comfortable with the language and the patterns," she said. Though Jim was older than most children when he started using the device, Gray didn't see that as a hindrance to his progress. "I've started adults on communication devices," she said. "I think what's most important is getting everyone involved in Jim's life on the same page and working toward the same communication goal."

“It’s a matter of …believing in him”

"I've been lucky to work in a lot of different settings. I would originally try working with him at home, but he would tell me, 'Go bye' when I would show up," said Heather Gray with a laugh. "So I've been seeing him weekly at ATECH for the past year, and I've also been seeing him at school.”

His relationships with teachers and classmates have also improved. He's friendlier and more outgoing, using his device to say "Hello" to those around him. Steve Caster says during state testing his teachers expected one response from Jim, but got another one from his point of view that was just as accurate. "I think the overall view is that there’s more to him inside that body," said Kristine Caster. "It's a matter of getting it out and believing in him, which they do. School members share in his sense of humor and want to do more with his device."

Jim is slowly learning to adapt and function in a world that might not always understand him, his parents said. Despite that, the Casters envision a future where Jim can thrive, and they have the same long-term goals and dreams that any parent has for a son — college, employment, independence.

“Jimmy will always need to use a form of augmentative communication. But the brain is a mystery organ, maybe one day he will get up from bed to start talking,” said Kristine Caster. “His speech is unintelligible. While he does prefer at times to use his voice or a quick sign instead of his Vantage Lite, I have reminded him several times that there will be people out there who will not understand and that he will need to use his ‘talker.’”