While speech therapist Sarah Allen has records denoting certain goals achieved while working with 8-year-old Isaiah who has autism, like the increasing frequency with which he's sought out augmentative and alternative communication (AAC), more important to her -- and harder to measure objectively -- is how often his intent is successfully communicated. 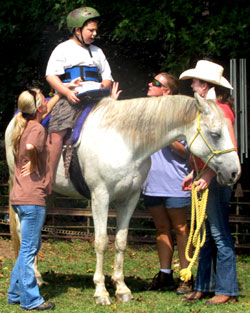 With Isaiah, it can be tricky. For instance, he might be looking right at her, with a certain look in his eye, and using his PRC Vantage to say "eat." "More likely, what he's really saying is 'bite me,'" laughed Sarah, who has worked with Isaiah for the past year and a half. "He's funny. He's really funny!" And the Vantage has played a significant role in that, giving him the language he needs to express that humor.

"If you're using single-meaning pictures, an apple is 'apple' and eat is 'eat.' There's no room for 'bite me,'" said Isaiah's mom, Rose. It's just one example of some of the surprises Isaiah is capable of producing with his Vantage, which allows him to press buttons showing images and letters that can "speak" for him.

On a recent extended visit to the relatives, Rose explained, leaving took longer than Isaiah would have liked. When tapping out the symbols and saying "go car" and "go home" didn't get anyone's attention, he hit the button for "snail," expressing his displeasure for the pace of their departure.

"We knew he was funny. We just didn't know how funny he could be," said Rose, who admits she didn't even know there was a button for "snail" and still doesn't know how Isaiah knew.

Getting to Eat Cheetos

For Isaiah, whose autism was late onset, "everything was right where it should be up until about 18 months," said Rose, describing how at that age he was using words and had a vocabulary that was normal to above average, maybe around 120 words. Then it abruptly stopped. "When autism took over his life, the first thing we noticed was the loss of verbal communication," she said.

The family tried different things like using the picture cards of the Picture Exchange Communication System (PECS) and teaching Isaiah sign language. "He learned them fine," Rose said, "but would not use them." Early on, he would resort to "pull and drag," taking her directly to the things he wanted -- but leaving her guessing on specifics. And there was no way to say things like "I want Taco Bell" when the closest one is miles away.

It was with that thought that she found the Vantage, with programmable buttons that allow him to specify not only what he wants -his first spoken words with it were "eat Cheetos" - but even where he wants to go, whether it be to Chuck E. Cheese Pizza ("Our biggest battle," said Rose) or to bed. Or he can ad lib. "If he wants to go outside but he doesn't have a key for 'outside,' he'll find the closest thing, like a bird, and say 'go bird' because in our lives the only place for birds is outside," said Rose. 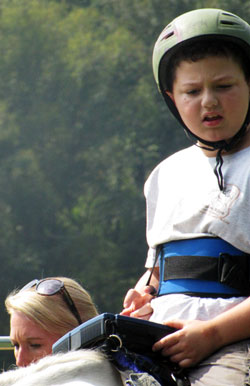 "That Isaiah has learned to initiate those requests himself rather than simply being asked what he wants is a huge step," said Sarah. "And that ability to be specific -- to properly convey intent -- has relieved a tremendous amount of frustration for him," she added.

"He used to be really bad about just giving up, chucking the chair and removing himself from a situation to avoid it," she said. "Now, if we're at the table, he can say 'go swing' if that's what he wants to do, and that allows us to have a discourse about it, and I can say that we're going to do that later. Instead of removing himself from the situation at hand, he's telling me 'I don't want to be doing this, I want to go swing,' and we're able to have a conversation about it." And that, Sarah said, works better than a preprogrammed series of sentences or phrases that fit into a specific plan.

Because Isaiah was able to say what he wanted -- what he intended -- he took to using the Vantage very quickly. "Within one or two session he was spontaneously going to it and making requests," said Sarah, who described how Isaiah quickly made the leap of connecting things like "go swing" to get to the swings and "more swing" to swing longer, into "go more" to swing faster. "Anything we would do, I would always make it a point for him to see the multiple meanings behind the icons."

"That the icons representing core language do not change from screen to screen to screen is a help and also aids in motor planning," said Sarah, who has seen children on speaking devices set back by drastic changes to the icon locations they are accustomed to. She likens it to "removing their tongue."

Looking to the Future

"Indeed, Isaiah knows that pain," said Rose. Though no one touches the device but Isaiah and his caregivers, on one occasion the Vantage broke. Though PRC shipped a replacement while it was serviced, the day waiting on transit was "agony" for him, like "having a piece of tape over your mouth with a toothache," said Rose.

He was so miserable that the family subsequently "searched every newspaper in the country" to buy a second Vantage so that Isaiah would never be without again. "The seller," notes Rose, "said they were only parting with it because the child using it could speak now and did not need it anymore." Isaiah is not there just yet, though he has very recently started to verbalize, and long-term Sarah is "absolutely optimistic that we will be able to transition from two and three button sequences to longer phrases and sentences in the print world."

However, Rose still wonders. Though she's gotten over her initial reservations that the device speaking for him would prevent Isaiah from wanting to talk, she's not sure he will be a verbal communicator. If not, she can still be content. "When we chose the Vantage for Isaiah, we were looking as far ahead as he could go. If he has to deliver a lecture in college, this could do it for him, whereas if you're in a crowded room using signs, people are going to miss that," she said. "Even if he never has a voice of his own, this can do that for him.

In fact, that's what we say when we see him without it: 'Isaiah, where's your voice?'"