Homesuccessits not what she wanted to say 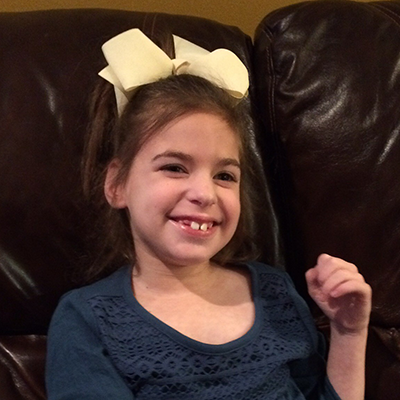 It's Not What She Wanted To Say

No matter how hard they tried, Lydia just wasn’t interested.

The sweet, happy little girl was diagnosed with Pyruvate Dehydrogenase Deficiency, a mitochondrial disease, which left her nonverbal.

To help their daughter communicate, Lydia’s parents began to search for a method that would work best for her, one that would help her learn and grow.

“As a young toddler, we started working with a BIGmack switch with her,” said her mom. “We started by modeling ‘cause and effect’ by hooking it up to different toys and household objects for her to activate (radio, hair dryer, walking puppy, etc.). We would also record different messages for her to “say” (a repetitive line in a book, calling mom, using “again” for an activity, etc.).

“She was always an easygoing child, and never really showed frustration or anger,” her mom remarked. “She would just lose interest and look away.”

“At age 4, her school speech therapist introduced a PECS binder to help Lydia make choices between two options,” she recalled. “We also used it at home periodically and eventually increased to three options.”

All pics were nouns or activities. However, there was no consistent motor pattern in place because the pics were always different and in different locations, and Lydia was only able to master this method when "the right" options were present.

Her family pressed on. At around age 7, she began working with a private speech therapist who would put four magnetic "buttons" on a metal tray, with each button representing a noun. For example, a monkey to represent a monkey song, a picture of tissue to represent wiping her nose, etc. But even after working with the therapist for two years Lydia still made very little progress.

No matter what method they tried, Lydia remained disinterested in learning to communicate. 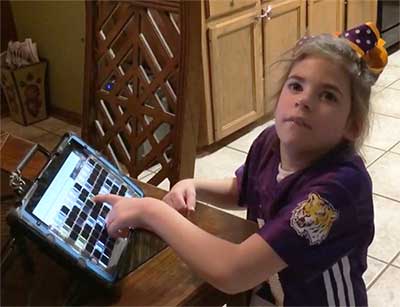 Finally, when Lydia was 9, the school’s speech therapist introduced her to the Language Acquisition Through Motor Planning (LAMP) approach, and invited Lydia’s mom to attend a LAMP workshop.

“When I sat at the workshop that day, it took everything I had not to flood with tears,” she said. “Everything I heard made sense and yet was so different than anything we had ever done with Lydia before. I felt like I had failed her, that I hadn't given her what she needed. I knew that this would work for her, that she could learn to communicate independently.”

That summer the family used the LAMP Words for Life app on an iPad before receiving approval for her own dedicated device.

“We started by putting a paper overlay to cover most of the words, leaving only 5-7 words that we wanted to introduce,” said her mom. “I would say that we saw progress almost immediately. Within the first couple of weeks, she was attempting to press words...looking back up at me as soon as the word sounded, as if to say, ‘Did you hear me?’”

Although motor planning was an issue, Lydia figured out after just a few weeks that if she took her mother’s hand and brought it to the device, she had some stability and would press a word with her mother’s finger.

“That’s when she became much more intentional,” said her mom. “You could tell that she was accessing specific words intentionally. Once we got a keyguard for the iPad, it was a game-changer. She could stabilize her hand on the guard and then just put one finger into a slot to access a word. Soon after that, we started with a trial Accent device.”

“She Finally Had a Voice”

“During the first few months of using the device, we saw a complete change in her. She seemed so much more mature,” said mom. “She knew that she finally had a voice. Our whole family began to treat her differently. Before the device, we would ask her questions and talk to her, but we would anticipate her response and respond for her. Now she uses her own voice.“

One of the first independent intentional words Lydia used was “more”. Lydia’s favorite game is the Fake Sneeze Game, or hearing people fake sneeze. Her Papa’s sneeze was the funniest to her, so every time he would “sneeze” Lydia kept telling him “more!”

Lydia also increasingly began to express her wants and needs.

“She often uses the word “look” to get attention from whomever she’d like. She always wants everyone to “look” at her,” her mom noted. “And she uses “turn” very appropriately and often, telling us to turn the page of a book, whose turn it is to throw a ball, etc.

“But her most used word is ‘on,’ to let us know that she wants to turn on her favorite TV shows. She was delighted when we added a two-hit function for her to tell us which show she wants to watch – usually Sid the Science Kid, or Peppa Pig.

“A fun story of her using the device to say things she never could have said before happened at the hospital while prepping for scoliosis surgery,” said her mom, smiling at the memory. “The nurse came in to take her blood pressure, and Lydia was not happy about it. She used her device to tell her ‘no,’ ‘stop,’ ‘go.’ We all laughed as I told the nurse that she had to go in order to honor Lydia’s request because we were teaching her to communicate.”

Although her verbal speech has not increased, Lydia’s family’s recognition of her cognition has changed. They now know what it is she wants and what she’s thinking, opening a world for them that they didn’t even realize was there.

“All those other methods we tried, we realize now that Lydia wasn’t interested because they didn’t really allow her to fully communicate,” said her mom. “The limited choices we presented to her were just not what she wanted to say.

“We give her much more credit now for having her own thoughts, opinions, wants, likes, and dislikes,” said her mom, beaming.

“It has been life-changing for Lydia and our family.”