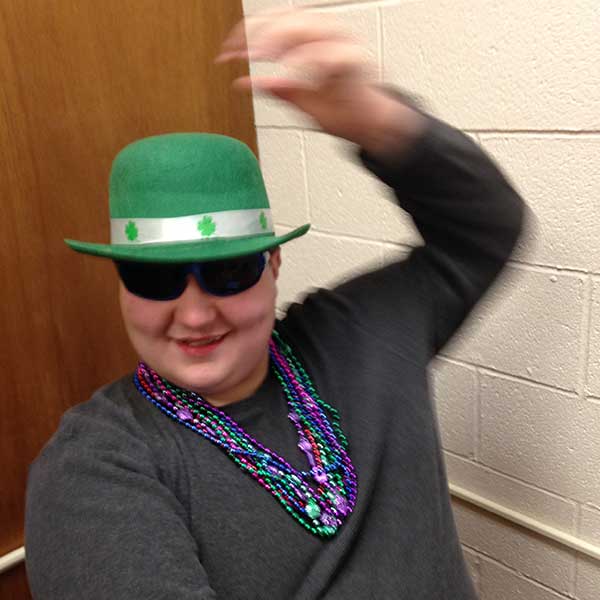 In 2016, Ethan Bartlett received his Accent 1000 – and he hasn’t stopped communicating since.

Ethan, a 14 year-old with autism, has been using his device to communicate everything from greeting others to asking questions in class to getting butter put on his roll!

"Ethan needed help to put butter on his roll at lunch the other day, so he got his teacher’s attention," said his Speech-Language Pathologist, Kathy Cooper, M.S., CCC-SLP. "She asked what he needed and he said, 'put on,' and pointed to the butter and roll."

Falling in Love with Communication

Since he received his Accent 1000, he’s been an enthusiastic and continuous communicator.

"Ethan loves to communicate so much that, because he typically has something to tell his therapist when he first comes to a therapy session, time has been allotted for that," said Cooper. "He will talk about who is and is not here ('Marilyn not here,' 'Janelle here,' etc.), which teachers likes 'snow' and which do not ('Teena no snow,' 'Janelle snow,' etc.) or something that happened at home ('Mom not happy,' 'Go up bed').

"The device even allows him to participate in morning meeting time. It’s really opened up his world for him," she said.

Ethan also loves to try to program new words on his device, and if his teacher or therapist forgets to lock it down, he will add words on his own.

On a more practical level, Ethan uses his Accent 1000 for a variety of communication functions, such as greetings/farewells, making requests ("I want Cheez-Its," "I want taste"), commenting ("I like gummy," "I like Cheez-Its"), labeling, answering questions, asking questions, etc.

"Ethan has also been using his device to direct the therapist," said Cooper. "For example, when the therapist was making faces to illustrate a variety of feelings, Ethan said, 'no silly.'"

Ethan also uses the word finder to look up words on his own very quickly, spontaneously self-correcting if he has used a word in error. Sometimes he’s looking up words so quickly that he doesn’t take the time to look at the icon sequence, which means he has to slow down and go back in to look at the sequence longer before he gets it.

The progress that Ethan has shown with his device continues to amaze everyone around him.

"I went back to the classroom to give out ACES day letters again the other day, and was told that Ethan spelled every word out loud letter by letter and then would say the word as well. The classroom aid took him around to each of the adults in the room so they could listen to him do it. I had tears streaming down my face," said Cooper.

"This year, Ethan has learned many grammatical structures to include in his sentences," she said. "He is now including articles (a, the), adding ‘s for plurals, and finding many of the verb conjugations such as adding third person singulars, adding '-ing,' or adding past tense. He can use negatives like 'no' and 'not' as well.

"He also has learned many new categories, and can find a wide variety of words just by going into a category such as clothing, body parts, furniture, feelings, places around school, vehicles (land, water, air), animals (farm/pet, zoo, water, insects, etc.), positions under the ‘in’ icon, toys, containers under the 'put' icon, and even state names."

"Since receiving his device, Ethan has developed more verbal speech and is able to express all his wants, needs, thoughts, and ideas," said Cooper. "We have really seen his personality and sense of humor come out now that he has a way to express himself. Prior to the device, he exhibited a great deal of frustration over not being able to communicate. He had no verbal speech and very few signs that he could use to communicate some basic things."

"Ethan used his device to count and to say letter names for a while, and then after hearing the auditory feedback for so long, has begun counting and saying letters out loud," said Cooper. "He now has moved into saying/imitating many words verbally during speech therapy sessions as well as using the words on his device for clarity for his listeners.

"It’s truly amazing how the Accent 1000 has opened his world."