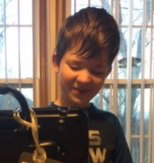 For 14 year-old Wesley, his journey to communication took a decidedly different route.

Born blind and diagnosed with Agenesis of the Corpus Callosum (ACC), Wesley talked freely until the age of five. Now 14, Wesley uses his Accent 1000 with LAMP Words for Life — VI. Following is his journey to communication, told through the stories of his SLP, his mom and his school's AT Specialist.

We just had to do progress reports and I noticed that 1 year ago, this was included in the baseline data statement:

“February 2019: Currently, Wesley will cry and/or show signs of being angry when he wants an item or action, but has a very hard time vocalizing what he would like. Often, he will braille on his "Smart Brailler" machine what it is exactly he wants, but will not always vocalize it. He vocalizes his desires currently 1 out of 5 trials.”

What a difference one year has made!

Wesley is currently using the PRC Accent 1000 with LAMP Words For Life - VI with the VI KeyGuide (currently the only model with a VI KeyGuide). At a meeting with his mom, Janet, we talked about Words for Life at the IEP, and right after that meeting Peter Schaafsma, our assistive tech person, learned about this system and we started exploring. We were able to get a trial device in May of 2019.

Wesley was the first student I had worked with that had no vision so we met as a team to discuss possibilities and strategies. Peter, Amy (Wesley's teacher) and I also did a video conference with a group from Ohio who were also trying to figure out strategies for a similar student. It sounded like we were embarking on new territory!

We decided to start with five words at the transition stage on May 10, 2019. May 16th, we went to five words, full. May 29th we added four more words. By June 3, we decided to open up the entire vocabulary and give him time during his day at school to just explore, which he did non-stop.

When regular school ended Wesley attended summer school, and by July 10 he was able to recall pathways of words and began putting noun and verb together with prompting. (He preferred to be told where to find buttons vs hand over hand – he's a very independent young man!) By Aug. 8, he was independently initiating short sentences.

Given the opportunity (and technology) to use his voice, Wesley's progress has been remarkable. He doesn't cry but instead uses his "voice" to say "I'm cold.” He also tells me he wants the voice changed on the device, so we've made a deal that he can change the voice on Mondays.

While I'm working with other students in his room, he'll pick up his device and sit at the same table with us, interacting with peers. His sense of humor is becoming very apparent as well as just how intelligent this young man is.

This has been inspiring to watch. Wesley's family are wonderful and Wesley is changing perceptions and attitudes locally. This has encouraged and reminded staff that we can make a difference, and that we can't always assume students are at and will stay at a certain level. It is also helping our community understand disabilities without limitations.

As a child, Wesley had a beautiful voice and was always singing songs, even if only a mother could make out the words. Last school year or so he started using a Smart Brailler to communicate words and needs that he couldn't get out verbally fast enough.

During his last IEP I asked if Wesley could be learning more technology. Having attended a lot of events where visually-impaired kids and teens were running around using iPads and iPhones like every other typical child, I brought up the possibility of expanded technology options for Wesley.

The school's AT Specialist, Peter, brought up the Accent 1000 plus LAMP Words for Life – VI. Until that day, I had never heard of it.

Wesley has taken to it so well! This device has become his go-to for communication as well as a learning device for speaking himself! He certain wants it with him at school and at home, almost just as dependent on it as his white cane.

I was actually a long-term substitute teacher in Wesley's preschool classroom (over 10 years ago). Back then he would often come to school crying and go home crying. I imagine his whole world was incredibly disorienting as such a young child with no ability to see anything. He would sing songs in class and rock his head side to side, but I'm pretty sure all of his speech/singing was echolalia. As he grew and moved to new classrooms that were louder, the concern for him grew as he stopped even the echolalia and kind of entered his own silent world. I think that is why there is so much excitement over his output on the device!

Today, I took in my cool, new Mr. Potato Head. I showed him where that was on the device one time then told him if he wanted it, he had to ask. The message I got (with a big smile) was "I want Mr. Potato Head."