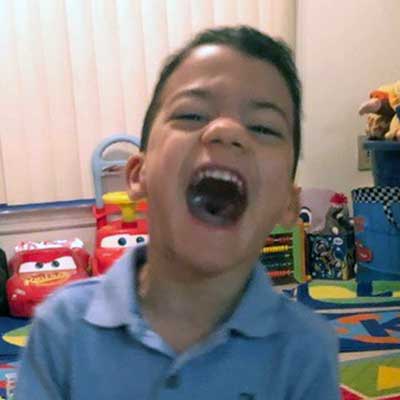 This is Noah England Outlin. He is four—he will be five in August.

Noah started using LAMP® Words for Life in September. Prior to this he was very proficient using picture exchange and static core boards combined with his verbal speech and sign language. As soon as I met him I knew he had so much more to say and just needed a bigger outlet.

So grateful to Kendal, our SLP, for introducing Noah to LAMP. It has truly been miraculous watching his frustration level recede as he is able to convey his wants and needs. We were anxious that LAMP would steal his auditory voice, but the opposite is happening. He is making more sounds than ever.

After a couple weeks it was evident that Noah would be capable of the full vocabulary with nothing hidden. He loved this freedom and was demonstrating recall of words he had only seen once. He truly blew me away!

Noah and his LAMP are doing great things. His LaLo was asking him about something and his answer was no. He shook his head no, but she asked him again, so he got his iPad and found no and pressed it.

His family support system is incredible. We met to discuss going through the funding process and his mother, grandmother, and aunt were so excited. They will do anything to see Noah succeed and have helped him reach all of his communication milestones with hard work, dedication, and love.

He received his LAMP through the funding process at Christmas time. I can’t imagine a better gift to get than communication.

My birthday was Wednesday. I had to leave for a prior engagement which left Noah at our house with his LaLo. When he came back inside after waving good-bye, he went to LAMP and typed in 'Bye Bye MiMi.' Later when I returned home, he typed in 'Love MiMi.' I have to add that it was the first time he identified me by name. Best birthday ever!

Noah is also blessed with amazing ABA therapists who see him at his home. They have attended LAMP training courses and embrace the process completely.

At the end of the holiday break, Noah’s mother asked him if he was ready to see Miss Erin. He typed no. Then he identified Braden (his best friend) and typed yes. He also identified his ABA therapists via their pics in LAMP.

Noah is now working on creating 4-5 word sentences and questions – things that are not possible with his verbal speech at this time. He is verbally imitating more words and seeking out opportunities to communicate more and more. He is using LAMP to sing along to songs and talk about his friends and family.

The phonics page has been incredible for him! He has been practicing speech sounds consistently and once he found that page he was so excited.

He is mimicking more sounds and makes it all the way through the church affirmation at the end of service. He started in May with 'I am.' Now he says it all (some words are garbled, but we count it all as success). 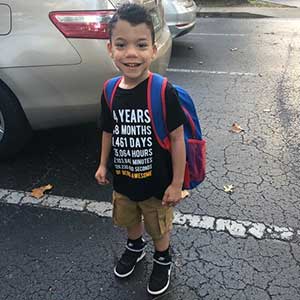 At just 4 and a half years old, I am constantly impressed with his knowledge and understanding of communication. He is making jokes and teasing with LAMP. I love to see his face light up when we work together and discover new words.

The word “intuitive” truly explains Noah’s ability to use LAMP. He instantly “gets it” and I get the joy of watching his language explode!