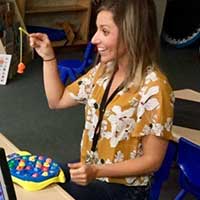 Reprinted from the LAMP™ eNewsletter, Issue 3

In this issue, we are highlighting the Monroe 2-Orleans BOCES (BOCES-2), based in Rochester, New York. They are a cooperative special education organization composed of nine school districts which offers programs for preschool through transition-aged students. 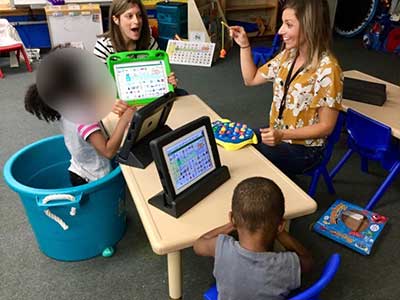 Over the last several years, BOCES-2 has focused on bringing robust language systems to their non-verbal and minimally verbal communicators through an established process that provides access to students using LAMP Words for Life® on loaned iPads. This process allows staff and families to trial the language system for an extended period while gathering the necessary data to acquire a personally owned speech-generating device through private insurance/Medicaid, etc.

After much reflection, BOCES-2 selected LAMP Words for Life as one of the primary AAC systems. Over the years, they saw many students exiting programs without functional communication skills due to the variability of AAC systems within the organization, confusion in regard to best practice AAC system features, and a focus on academic responses rather than identifying ways to build generative language skills in students. Their quest for a more effective approach lead the Assistive Technology team to LAMP Words for Life and the LAMP methodology.

Two new preschool classrooms were created for the 2017-2018 school year aimed at helping children who are mostly non-verbal learn to communicate. These programs, consisting of a ratio of eight students to one teacher and three student behavior assistants, aimed to teach the students functional language skills through the LAMP therapeutic approach.

Each student was given access to a loaned iPad loaded with LAMP Words for Life in order to begin assessing its ability to augment his/her communication abilities. Having access to a robust language system containing the most frequently used words, organized in a manner which does not require a high level of navigation to access language, resulted in students quickly developing motor automaticity, reducing the cognitive and memory load required to operationally use a speech-generating device. Students began to develop and demonstrate the ability to create spontaneous and novel utterances for a variety of communicative functions, including requesting items/recurrence/cessation, directing, commenting, and answering questions.

In order to keep the students’ interest, staff focused on providing an abundance of time throughout the school day where they followed a student’s lead in determining intrinsically motivating activities to teach vocabulary. This led to a marked increase in joint engagement and interactive communication. Also of note, multiple students began to use their first words verbally. 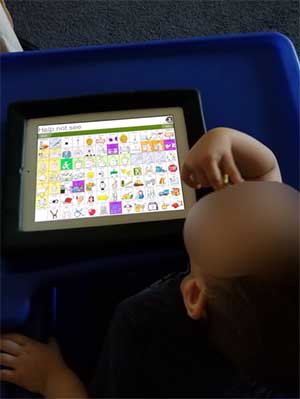 They incorporated components of a language-rich environment which included immersing all students with visuals to support generative language using the LAMP Words for Life icon sequences for single words and phrases throughout the environment, a focus on weekly core vocabulary words, and staff using aided language input.

The NuVoice PASS software was used to support set-up of this immersive environment including emulating the LAMP Words for Life language system to be projected on an interactive smart board which allowed staff to model language during larger group instruction situations, and creating support materials such as low-end manual boards of various sizes to support modeling top level icon sequences.

Here is what the staff at Monroe 2-Orleans BOCES (BOCES-2) have to say:

“The language rich classroom model, utilizing the LAMP approach and LAMP Words for Life, has opened up a whole new realm of teaching for me. It has also helped my students increase language skills, including communicating their wants and needs, helping them to learn new vocabulary/concepts, as well as increasing the length of their sentences and improving the overall quality of their communication skills. It has helped me to slow down and utilize language more effectively with students and staff. Lastly, it has promoted the literacy skills of students in ways I could never have imagined and piqued many a students’ interest in exploring letters, reading, and playing with language,” said Jessica Weese, preschool teacher.

“When working with students who have communication barriers, consistency and patience are required in order to develop language skills. It is important to incorporate language through modeling and visual supports not only in the speech setting, but throughout a student’s entire day,” said speech therapist, Rachael Wall.