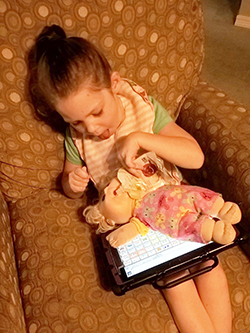 It was early 2011 when my wife and I had finally finished the paper work for adoption, and the waiting game was on. I was so anxious and scared that, whenever the phone would ring with an unknown number, my heart would start beating like crazy.

Around June 20th, we were driving to Texas for a little mini vacation when we received the call: Our case worker told us a baby girl had been born 10 days ago, and the birth mom had chosen us to be her parents. I can still remember the first time I saw her picture. As tears streamed down my face, I was overjoyed at the thought of being a dad and of the opportunity to be responsible for another human being. On July 5th 2011, we officially welcomed our daughter into our home. 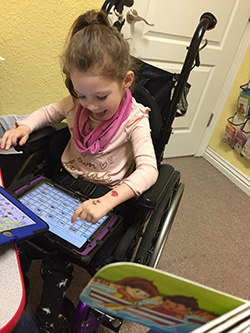 It was around the 3-4 month mark that we started noticing that Kylee wasn't meeting a lot of her milestones. She wasn't rolling over, she wasn't trying to sit up and she wasn't trying to crawl. At this point, we thought we knew that in time she would start picking up on these skills and that she was just a little behind in her development. Looking back now, if we had known what to look for we probably would have figured it out sooner.

One day, my wife took Kylee to an indoor pool with a friend and her kids. It was a relatively warm pool and she was holding our daughter in one arm and her friend’s daughter in the other. She noticed how freely her friend’s daughter moved around and splashed. Our daughter was having a great time, but her muscle tone was so stiff in comparison that she figured that something was off. When she got home she mentioned to me the differences between the two.

I decided to take her symptoms to the internet: spastic muscles, major left-hand dominance, lack of progression in milestones, etc. After putting all of her symptoms into the search engine, with a simple click of a button, the undeniable truth was set before me: Kylee matched 8 of the 10 symptoms of cerebral palsy. The evidence was so convincing that I knew at this very moment that our daughter had CP.

I woke my wife up and shared the information that I had discovered. For both of us, it felt like a bomb had just gone off in our perfect little world: Would our daughter ever walk? Would she ever talk? Will she be stuck in a wheel chair for the rest of her life?

Over the next month or so, our daughter was formally diagnosed with Cerebral Palsy and Bilateral Closed-lip Schizencephaly.

For several months I would wake up every day thinking that it was all one big nightmare. I remember one day after a very difficult day at work, I walked into the house and saw our daughter smiling from ear to ear and anxious to see me. It was at that moment that I believe that God had said nothing has changed, she is still the same beautiful little girl that you fell in love with months ago.

As we went along, we started to learn the ins and outs of having a child with special needs, with therapies, contraptions, braces and doctors’ visits soon becoming a daily norm in our life.

One of the most frustrating things as time went on for all of us was the communication barrier. You see, our little girl is very intelligent, teaching herself to spell words with plastic letters at as early as age 3. To this day, her favorite pastime is looking at books and having one of us read her as many books as we can stand at any given moment. But she just couldn't figure out how to tell us what was going on in her head. As the reality of her not being able to talk started to sink in, we noticed a huge gap. Our daughter would desperately try to tell us something through pointing, babbling, and ultimately getting very angry to the point of strong outburst to try and get us to understand what she was trying to tell us.

We knew that she could understand what we were saying to her, but she struggled with finding an effective way of communicating with us. We were at a point that we needed to find a way for her to be able to communicate with us. This is when she met Lynsey, her speech therapist. Lynsey saw the potential in our daughter to use a communication device and immediately put together a plan to get her started and to train her how to use it. 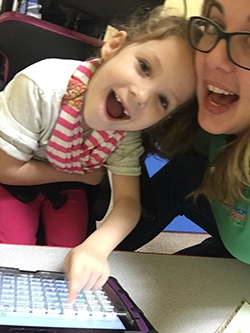 When I met Kylee in 2013, her only method of communication was crying. Her family was frustrated and hopeless but committed to their daughter’s success. We began working on improving play skills and using simple gestures to express her wants and needs. Kylee quickly came out of her shell, and it became clear that she needed a high-tech system with access to a robust vocabulary.

We explored and completed trials with many options, and it soon became clear that LAMP Words for Life was the best option for Kylee. The consistent location of icons/words allowed her to quickly learn and access words with reduced motor and cognitive demands. In addition, the LAMP approach’s focus on joint engagement and readiness to learn really helped her family and other team members understand that learning language should be interactive and engaging, not “work.” Not only did Kylee learn words by hearing them each time she pressed the icons, she even developed early literacy skills due to seeing the words on the display each time!

In addition to Kylee’s quick ability to learn, the training component of the AAC program at Children’s Therapy TEAM allowed her communication partners to become active partners in Kylee’s language growth. Her parents and therapists have learned how to model language, set up communication opportunities, and attribute meaning to promote authentic communication and language use.

Just like most children these days, Kylee was drawn to electronics, so the communication device fit right in. She loves it! We named it “Gabby,” and every time she wants to tell us something, we ask her if she needs Gabby and she gets all excited.

Over the course of a few years, our daughter has learned to ask for things she needs. She likes to tell jokes, and one time she even told my wife that she needed to put on her make-up!

On a daily basis, she asks for hugs and kisses. On occasion, she will tell us that she loves us: a task that was never possible before this. The device has allowed us to see her personality, to understand her frustrations, to know what she likes and dislikes. It has opened the door of communication between her and the world.