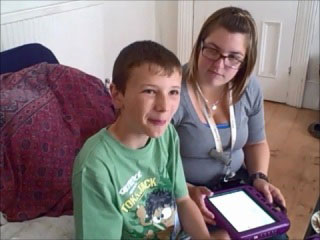 Like many 13-year-old boys, Archie Pollock has found a passion for a particular sport – surfing.

He loves the feeling of the cool, crisp waves against his body and the warm, gentle breeze against his face.

But Archie didn’t always enjoy surfing – or any activities. At age 3, Archie was diagnosed with autistic spectrum condition and dyspraxia, which severely limited his ability to socialize and communicate. It wasn’t until he began working with the Language Acquisition through Motor Planning (LAMP™) approach and a device featuring Unity language software that life started to change for the Pollock family.

Being Diagnosed with Autism

According to Archie’s mom, Chris, Archie was a very smiley, content, happy baby. “At about 11 months, he knew some simple words, but then he began to lose his sounds,” said Chris, who lives with her husband, Richard, and their three children – Archie, Joseph, and Louis – in the United Kingdom. “At about 17 months, we also realized he was not pointing. And as he approached his second birthday, it became apparent that he was fine with adults, but he ignored other children.”

Chris said she and Richard took Archie to a speech therapist, who diagnosed Archie with a language delay. During the next year, however, it became very apparent that much more was going on, as he continued to lose the ability to produce sounds while displaying a much more limited attention span. In 2002, Chris and Richard decided to have a private speech consultant evaluate Archie. He was then referred to a National Health Service (NHS) multidisciplinary team who assessed him during a six-week period. After this assessment, at age 3, Archie was officially diagnosed with autism.

“We had been expecting this,” Chris said, “but were obviously still devastated. We very much hoped that he was high functioning.”

Searching for the Right Approach

Following his diagnosis, Archie began working with a speech therapist who introduced the Picture Exchange Communication System (PECS) as a way to help him communicate. The method uses a series of cards that they would pass back and forth to each other. “For many years, that was our main method of communication,” Chris said. “It helped, but Archie would still become very frustrated, and he preferred to rely on his own vocalizations. The problem was, those outside of our family still had trouble understanding him.”

At age 8, Archie’s therapist reintroduced sign language as another communication option. But according to Chris, his signs weren’t very accurate, which, again, produced greater frustration.

As Archie grew older, Chris noticed that he enjoyed using Google Maps on the computer. “He always was very attracted to the computer,” she said. “We would tell him to find his grandparents’ house, and he would find it. He also could remember places he had been to many years ago – even places he hadn’t been since he was 2 years old – and point them out on Google Maps. We were very impressed, and he enjoyed it.”

Because of this interest, they decided to try introducing Archie to a new speech language app on the iPad. Chris said she was very hopeful that this method would finally help.

“The way most apps are set up, the words are in categories, which was again very frustrating for Archie,” Chris said. “He just wasn’t interested. At that point, we began to lose hope that he would ever be able to effectively communicate.”

A Light at the End of the Tunnel

In 2010, Chris met Nikki Blundell, a speech and language therapist in the United Kingdom. They quickly developed a friendship, and Chris asked Nikki to begin working with Archie. Upon their first meeting, Nikki remembers she had a strong sense that Archie had a lot to say.

“When I first met him, he had one recognizable word, which was ‘mummy,’” Nikki said. “He also had consistent vocalizations, which meant that he had some words, but you had to know him very well to understand what those meant. I remember thinking that Archie really had potential.”

According to Nikki, she initially set a goal for Archie to be able to use a set of 10 to 20 core words that he could verbally say and would be recognized by people who were less familiar with him. “Because he was interested in Google Maps, I would say, ‘Find me a purple bus.’ He would go on the computer and find a purple bus, and we’d practice trying to sound out the b-u-s sound. If he did that, he’d get a sweet or a bit of fruit to keep him motivated,” Nikki explained.

However, because she felt that Archie had so much potential, Nikki began to think of alternative methods for him to communicate. That’s when she told Chris about the LAMP program and the Unity language software.

“I initially did a lot of research about it, and to be honest, I didn’t expect it to work because we already had tried so many different options,” Chris said. “I didn’t expect him to be interested.”

Nikki organized a trial loan of the Vantage Light communication device containing the Unity language software. Within 20 minutes of their first session, Archie made a three-word phrase. “He had never produced a comprehensible set of three words,” Chris said. “It really surprised me. Right from the beginning, it was clear that he was interested.”

Archie continued to use the LAMP program and the device – which he and his family called his “talker” – for the three-week trial period. But when the trial ended, Nikki had to return it.

“One of the hardest things for me was when I had to take the talker back; Archie got very upset,” Nikki said. “He just kept saying nininininini (Nikki). He had never become attached to anything like that before. It showed how much ownership he took of it in a very short time.”

The Pollocks realized how critical the LAMP approach and software were for Archie, but they needed to apply for funding in order to purchase the device. On a website called mumsnet, Chris briefly mentioned that her family was seeking funding. Shortly afterward, an anonymous donor contacted mumsnet and said he or she wanted to purchase the talker on Archie’s behalf. Chris explains that she was “absolutely staggered.”

The Words Were in Him All Along

Chris says one of the biggest days for Archie was when his very own talker arrived via special delivery. “Archie doesn’t really open things; Christmas typically lasts about six weeks for us because it takes this long to open all the presents,” she said. “But with the talker, he was so excited. He immediately started using it.”

Chris said it was amazing to see Archie teaching himself how to use the device. “He would find the words on the talker by sitting down and exploring it and then would use those words correctly,” she said. “His sentence length has gradually increased in a typical fashion, although he sometimes gets words in the wrong order. It certainly has been a learning process – and that process still continues.”

When asked why she thinks this approach has been so successful for Archie, she says, “LAMP is different because it's non-categorical. It's much more like speech. When I move my mouth a certain way, I say 'beach.' When I move it a different way, I say 'cat.' LAMP is the same. Archie moves his hands one way and gets 'beach,' and he moves them a different way and gets 'cat.' It's also fast, so he can get his point across quickly.”

According to Chris, there is no doubt that the LAMP program and Unity language software have changed Archie’s life. “Within the first or second week of having his talker, he went to the beach where he surfs and ordered an ice cream by himself for the first time,” she said. “I had tears in my eyes.”

Archie now has been using his talker for one year. He continues to attend Milford School, a school geared toward children diagnosed with autism, as a day student and Downham House Respite facility once a week.

“When he comes home from school, the talker in his bag, and the first thing he does is take it out. It’s with him all the time,” Chris said. “We’ve wanted to go to Ireland to visit his grandparents, and when he heard us talking about it, he used the talker to say, ‘Talker to Ireland?’

“Now he tells me loads of things about school that I would never have known,” Chris continued. “For example, they wear a different color T-shirt each day of the week. He’ll use his talker to tell me one of his teaching assistants wears black on purple day, and he’ll start laughing. He has such a sense of humor that can now be shared with others.”

Archie can now use a four-phrase sentence independently and a five-word phrase with a little bit of prompting, which is a tremendous improvement.

“The words were in him all along,” Nikki said. “I think he’s still learning, but this device and approach really work for him. The device allows for teaching on his own terms. He is keen to show me where things are, and I really do feel he is proud of these words he is learning. He smiles a lot more, and when he shows you the words, and when you praise him, he’s very happy.”